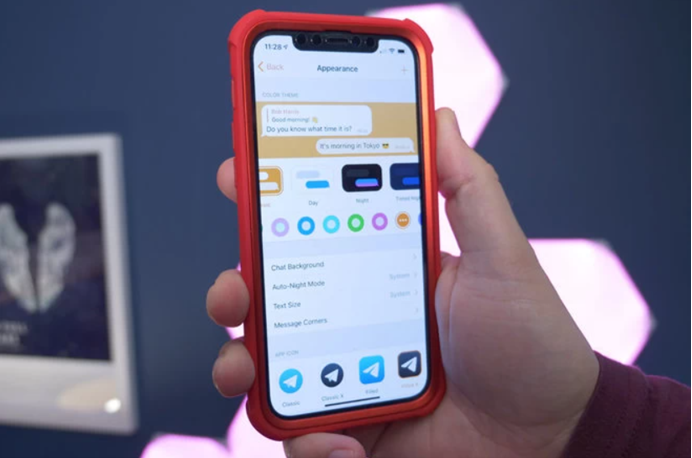 Telegram has been around since 2013, but it’s currently having a moment. In the wake of the WhatsApp controversy, the company, which pushes itself as a privacy-focused service that provides both one-on-one secure messaging as well as more social features like group chats, shared that it had gained 25 million users over a 72-hour period in mid-January. The service says it now has 500 million active users.

For this project, Dubai-based Telegram had raised $1.7 billion from investors in 2018. It had planned to distribute its token, called grams, after developing the blockchain software. Telegram offered to return $1.2 billion to investors earlier this year.

“Telegram has a social networking dimension. Our massive public one-to-many channels can have millions of subscribers each and are more like Twitter feeds. In many markets the owners of such channels display ads to earn money, sometimes using third-party ad platforms. The ads they post look like regular messages, and are often intrusive. We will fix this by introducing our own Ad Platform for public one-to-many channels,” Durov wrote today.

All existing features will remain free, said Durov, who is one of the biggest critics of Facebook-owned WhatsApp, adding that Telegram is committed to not introduce ads in private one-to-one chats or group chats because they are a “bad idea.”

“We are not going to sell the company like the founders of WhatsApp. The world needs Telegram to stay independent as a place where users are respected and high-quality service is ensured,” he wrote. “Telegram will begin to generate revenue, starting next year. We will do it in accordance with our values and the pledges we have made over the last 7 years. Thanks to our current scale, we will be able to do it in a non-intrusive way. Most users will hardly notice any change.”

Pure instant messaging — simple, fast, secure, and synced across all your devices. One of the world’s top 10 most downloaded apps with over 500 million active users.

FAST: Telegram is the fastest messaging app on the market, connecting people via a unique, distributed network of data centers around the globe.

SYNCED: You can access your messages from all your phones, tablets and computers at once. Telegram apps are standalone, so you don’t need to keep your phone connected. Start typing on one device and finish the message from another. Never lose your data again.

UNLIMITED: You can send media and files, without any limits on their type and size. Your entire chat history will require no disk space on your device, and will be securely stored in the Telegram cloud for as long as you need it.

SECURE: We made it our mission to provide the best security combined with ease of use. Everything on Telegram, including chats, groups, media, etc. is encrypted using a combination of 256-bit symmetric AES encryption, 2048-bit RSA encryption, and Diffie–Hellman secure key exchange.

100% FREE & OPEN: Telegram has a fully documented and free API for developers, open source apps and verifiable builds to prove the app you download is built from the exact same source code that is published.

POWERFUL: You can create group chats with up to 200,000 members, share large videos, documents of any type (.DOCX, .MP3, .ZIP, etc.) up to 2 GB each, and even set up bots for specific tasks. Telegram is the perfect tool for hosting online communities and coordinating teamwork.

What’s the difference between Telegram and WhatsApp?

Odds are good that if you’re looking into Telegram as your new messenger app of choice, you’re fleeing WhatsApp.

In 2014, Facebook announced that it was buying the popular messaging app WhatsApp. Since then, the social media giant has mostly treated WhatsApp as a separate entity from its social networking platform.

That all changed in early 2021 when WhatsApp updated its terms of service to inform users that their data would now be shared with its parent company, Facebook. Many users were outraged. But it turns out to be a much more nuanced change than people originally believed it to be.

In fact, when you send WhatsApp messages to friends and family, they remain end-to-end encrypted by default. It’s actually only messages with some businesses that may not be end-to-end encrypted, depending on what third-party access they’ve enabled for hosting services. The app will warn you what privacy level you can expect on any given message via color-coded alerts at the top of your message.

While WhatsApp tried to clarify these changes after the initial uproar, users who already distrusted Facebook wouldn’t be convinced. The magnitude of the WhatsApp exodus is unclear, but as competitors like Signal and Telegram flew to the top of the App Store charts, WhatsApp completely dropped out of the top 20 apps.

Many of these security-conscience users seem to have landed on Telegram. Ironically enough, if security is first on your mind, WhatsApp is the better choice. WhatsApp messages, with only a few exceptions, are end-to-end encrypted by default — and that includes group chats. Telegram users, on the other hand, have to choose the “secret chat” option to get end-to-end encryption, and those messages can only be between two people. So there’s no way to have end-to-end encrypted group chats.

Telegram, in some ways, functions like a social network even more so than WhatsApp, the messaging service run by a social network. Users on Telegram can choose a username along with the required phone number registration, while WhatsApp and other messengers tie your identity to your phone number. Telegram can also host up to 200,000 users in a single group chat. On WhatsApp, the group chat limit is 256 people.

In terms of data privacy, many people were upset by the idea of WhatsApp starting to share data with Facebook. But, in fact, that has already been happening for years. The issue at hand is metadata — things like your location, who you’re talking to, and more — not the content of specific messages.

Nevertheless, metadata can tell you a lot about a user and it’s not insignificant in terms of privacy concerns. Thus it’s important to note that Telegram collects the very same type of metadata that WhatsApp does. What’s more, the content of unencrypted messages are also stored on their servers, which is not the case with most messages on WhatsApp, which are end-to-end encrypted by default.

When it comes to choosing between Telegram and WhatsApp, here’s what you want to consider: If you’re looking for a messaging service that will collect less of your data, choose WhatsApp. If you’re looking for a messaging app that’s less likely to use that data in some way, Telegram is your choice. Telegram has previously gone on the record saying they have no interest in selling the company or serving users advertising, hence, your data is least likely to land in the hands of third-party organizations.

It’s not as popular or wide-spread as apps like Facebook Messenger or WhatsApp (also Facebook), but it has a lot of features that make it fun and easy to use. It’s not just a boring secure text messenger.

Like any good messenger app, you can have individual or group chats, with those group chats good for up to 200,000 members. Plus, you’re free to send and receive files, images and data without any limits on the size or number of those. You can make voice calls or video calls too, so it’s truly a fully-featured app.

One of the fun parts of the app is its collection of downloadable sticker packs. Some are animated, others still, but they automatically pop up when you use an emoji so that – if you want to – you can replace those yellow, static faces with fun animations. With tie-ins with the likes of Star Wars, Avengers, Wizarding World and other popular characters, there’s no shortage of ways to express emotion.

It’s customisable too, so you can choose what colours and gradients you want to use in your chats, from changing the background shade to adjusting the colour of the speech bubbles within chats.

Its best feature is probably how quick and reliable it is. New messages appear on all your devices at once, and any updates are virtually instant, so if you have to switch from phone to desktop (or the other way around) it’s easy and convenient to do.

Recent updates have seen the app add features like having multiple pinned messages within chats, which might be useful in big group chats, or if you’re sharing a shopping list with your partner/housemate. Live locations can be set up to alert when you’re nearby a friend if you’re planning to meet up and sending multiple music files automatically creates a short playlist.

The Top 8 Advantages of Using Java in Mobile App Development